Back in the game!

One of my new year's resolutions last year was to get back into blogging. I've just spent a furious 10 minutes trying every password I've ever had, trying to log into this account, and upon flicking through my previous posts, it seems I outdid myself. I blogged twice in 2017. In January. Well, nobody really keeps their resolutions, do they?

Anyway, we're almost at the end of March, and I've just finished a run of my first play of the year, back once again in my second home of beautiful Bedford. This blog post comes to you from the depths of post-show nothingness. I haven't yet felt the despair that I sometimes get of missing a show (I definitely enjoyed it), but maybe that's because I've kept myself busy today, and I haven't really had time to think upon it.

The play in question was 'Life x 3'. Again, as in previous posts, I won't divulge details in case of spoilers for people who may see it in the future, but I had enormous fun. My regular Bedford stage husband (as he will now be referred to) recommended me to the director, who gave me a call to chat about it. Not wanting to seem too desperate(!), I said I'd read the script before making a decision, but on hearing who the other actors already cast were, there was no way I wasn't going to do it.

A good chunk of the play was focused on science and space talk. All of which went flying over my head faster than you can say, "the flatness of the Milky Way's dark halo!", whatever that means! And to tell you the truth, it was only today that I actually Googled a few words (unrelated to science) to find out what they meant. I must have done a pretty good job of pretending to know what everyone was saying! And now I can use the word 'lugubrious' in everyday conversation!

It was a good run, and I got to share the stage with some amazing people.

But enough about the play itself. It's been over a year since I did a run of a show that made me feel the way I do right now. Sure, I had work for the rest of last year, and I loved every job, but there was something about this week that made me question myself.

I have a job that I enjoy in teaching and writing and directing shows for my students, but am I pushing myself enough? I want to get out there and do more things.

Why am I not writing things for myself? I have friends that I would kill to work with and produce fun projects with, and I'm not doing that. Why not?
People enjoy the things that I write. People are incredibly complimentary about my performances (even when I think that I certainly don't deserve them (Friday night this week- ouch!)

I see other people out there doing amazing things, and I feel like I'm being left behind. Am I just settling and hoping that someone keeps recommending me for projects or relying on companies I've previously worked for to give me a call? That's not enough, and I'd be stupid to think it was.

So with a bit of luck, I'm hoping 2018 turns out to be more successful. Because something has clicked in my head this week. I want to have the best times with the best people doing the thing that I love. If other people can do it, why can't I?

Watch this space, she's coming back!

Natalie Castka
Hello, I'm Natalie. Despite what many people say, I'm an actor. These are my thoughts about it. Some good, some not so. Welcome to the industry... 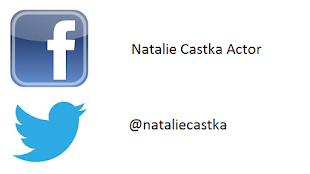